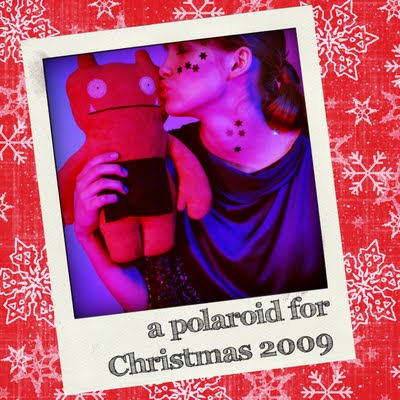 Most Christmas songs are fairly terrible but there's a few that stand out as being great - 'I Believe In Father Christmas' by Six By Seven is great and 'Christmas Wrapping' by The Waitresses is good too. But by far the best one (thought admittedly not originally a Christmas song) is 'Stop The Cavalry' by Lona Lewie. So when we were asked to record a song for Polaroid's 'A Polaroid For Christmas' compilation there was no contest - and of course the name was an added bonus...

We recorded the track at home in London over the last couple of weeks and somehow the neighbours didn't complain - hope you like it, you can download it from polaroid.blogspot.com now, along with the other tracks on the compilation by people like The School, His Clancyness and Electric Assembly, as a totally free Christmas present. Happy Christmas! x

Christmas is coming and so is our Christmas gig on the 10th at the Wilmington Arms for Goo Nite. I promise to have fairly lights on my Uke. Support is from Bleeding Heart Narrative, Quinta and We Walk On Ice... Thursday 10th Dec at the Wilmington Arms, 69 Rosebery Avenue, doors 7:30pm/£5. Here's the facebook link and here's a flyer.

Our Christmas recording is going well... very well, we're excited, can't wait to release it into the world... 13th December is the date!

Hi! I have some good gigs coming up before Christmas with The Lost Cavalry... Thursday 26th Nov in Brixton supporting the brilliant Jonquil - that's going to be a top night. Then Monday 30th in Camden playing with our friends Marcel for their EP launch party, and then in December our Christmas gig on the 10th at the Wilmington Arms... we've been working on a few new songs and are hoping to play a couple then. One is based on this short film.

We've also been recording a Christmas cover song for the Italian music blog Polaroid's next compilation. I'm not going to tell you what the cover is, but if you take a guess you will probably be right ;-)

And finally, if anyone fancies a night out dancing and then come to the Wonderland Unbirthday Party this Saturday (21st) at Jacks, London Bridge where I will be staying up late and DJing 'chilled out grooves for worn down shoes' from 5am.