We've got a couple of acoustic gigs coming up, the first as part of an all night party organised by the Wonderland Festival this weekend... it goes on until 9am the next day but we're very unlikely to last that long... we're playing during the day on the Saturday. Email us if you want an invite, as there's only 100 tickets available for the event. Then a couple of weeks after that we're playing a laid-back Sunday gig at The Fellow in Kings Cross, as part of the No One Died Sunday Flophouse... with a BBQ and Sunday quiz too. Plus it's FREE entry. Here's a link to the Facebook event. x

So, since February I've been hiding myself away, working with my new band, who I can now reveal as... The Lost Cavalry. So far, there's four of us, and the nice thing is that they're all friends who I've been in band with before - Nick from my uni band 'Amber', Oliver from Xup and Dave from my first ever band at school. I'm playing mainly guitar, uke and concertina and most importantly - I'm singing too.

Our first gig was last night at a bar in Camden - we'd been keeping it quiet to see how it went, but it was a definite success so now we're ready to unleash ourselves into the world! ;-)

So expect some demos and photos on a new web site and myspace very soon... 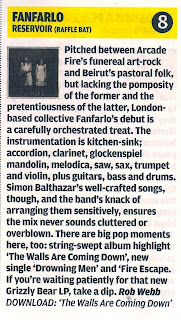 The Fanfarlo album 'Reservoir' is now available both on CD and iTunes... featuring the creative stylings of yours truely on lead guitar. Buy buy buy!