Hi! I have some good gigs coming up before Christmas with The Lost Cavalry... Thursday 26th Nov in Brixton supporting the brilliant Jonquil - that's going to be a top night. Then Monday 30th in Camden playing with our friends Marcel for their EP launch party, and then in December our Christmas gig on the 10th at the Wilmington Arms... we've been working on a few new songs and are hoping to play a couple then. One is based on this short film.

We've also been recording a Christmas cover song for the Italian music blog Polaroid's next compilation. I'm not going to tell you what the cover is, but if you take a guess you will probably be right ;-)

And finally, if anyone fancies a night out dancing and then come to the Wonderland Unbirthday Party this Saturday (21st) at Jacks, London Bridge where I will be staying up late and DJing 'chilled out grooves for worn down shoes' from 5am. 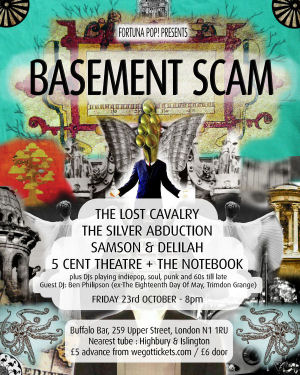 We're playing at the Fortuna Pop! night 'Basement Scam' at the Buffalo Bar, Islington on the 23rd - we'll be on last at 11:30pm, so prepare yourself for a late night! We promise to be finished before the last tube though... Also playing are: The Silver Adbuction + Samson & Delilah + 5 Cent Theatre + The Notebook. Tickets at: www.wegottickets.com

AND! As if that wasn't enough, that same day we'll be squeezing in an acoustic instore at Beyond Retro for their Haloween party - so you can come see us play twice in one day. We'll be playing at about 7:45pm before heading up to the Buffalo Bar. x

A few weeks ago filmmaker Bryan O'Neil recorded us performing some of our songs acoustically in my front room in Ealing, West London. If you're extra observant you may recognise the room from the video I made a while ago for Fanfarlo's 'Outsiders' :-)

Here's a couple of the videos from the session that we recorded especially for Portuguese music site the Royal Cafe, of 'Oh Sally' and 'Secret Steps'... royalcafe.wordpress.com/2009/10/03/royal-cafe-convida-the-lost-cavalry/

Enjoy! More to come at a later date! x